Outside of the square: a quirky restoration project 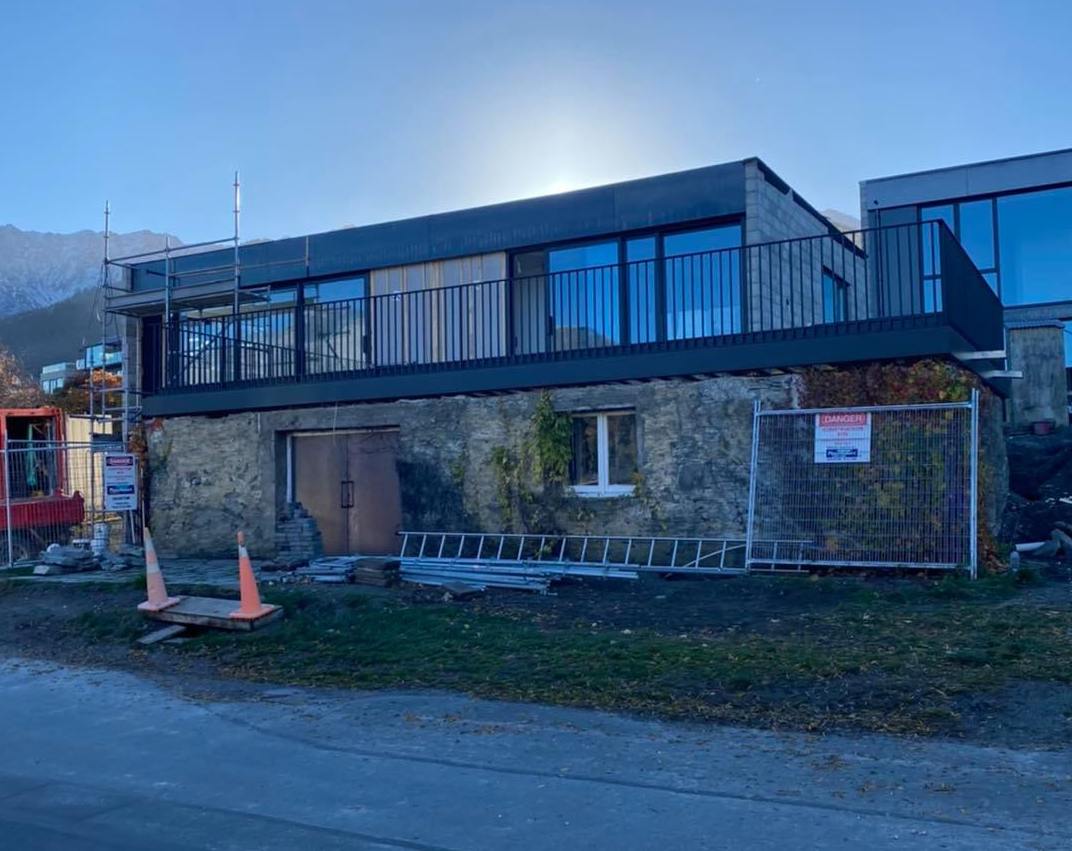 “You’ve got to have a bit of vision and imagination,” says Lynda, as she stands in a dust puddle in the dark remnants of her art gallery.

Monty the dog is sniffing at the base of one of the old schist walls and the red leaves of a climbing plant obscure the remaining window’s lake views. Outside, the builders are busy – the project is due to be finished in 2021.

Lynda Hensman’s Ivy Box Gallery has been a favourite among locals since it opened in on Park Street (Queenstown) in 2015. Originally the town butcher’s shop, the building has been haphazardly renovated and added to over the years. It served as what Lynda calls a “snowboarders’ den”, housing seasonal workers who didn’t care about the building’s lack of insulation, until Lynda transformed it into an art gallery.

The exterior of the building was cloaked in different varieties of ivy and climbing plants like Virgina Creeper which gave the building a vibrant red hue each autumn. It’s this appearance which made the building look so quaint and Instagram-able. But Lynda explains that, sooner or later, a more serious renovation was required:

“The rats were holding hands in the walls, they were keeping this up. When the builders removed one of the floors, 90 years’ worth of rat shit fell down on them. I had to buy them a box of beers for that.”

In 2017, she contacted architect Thom Ibbotson from Yoke to help bring the building up to modern standards and to develop living spaces for Lynda and her daughter on the spacious section behind the gallery.

“I chose Thom because he was young, intelligent and very fresh with his ideas and concepts,” adds Lynda.

Thom says a technicality within the resource consent process has become an asset to the project.

“Resource consent ended up triggering work to be done to the existing building, which had a 1970 add-on that was only really held together by ivy. The bottom part of the building was schist and we wanted to keep that – that’s the historic part.

“[…]The building isn’t classed as historical… but it’s proper old, nothing is straight or stable. A lot of work has been done to preserve three walls. A lot of neighbours have a romantic relationship with the building, but it’s the 70s portion that most people could see.”

Outside of the square

The building was uninsulated and Lynda had to wrap up warm to work in the gallery – particularly during Queenstown’s icy winters. The renovations will change this, creating a practical space that’s warm and a pleasure to work and create in. Thom says that Lynda’s use of the space – and her personality – have also shaped the project.

“What this project is and what it is about is specific to Lynda. It’s not a normal brief. It’s a home occupation and a hobby and this is her unique approach. She’s a great client, one who’s wanting to take risks.

“Her creativity has added a lot to this project and her foresight as an artist meant that she knew what she wanted – bold, strong forms and good aesthetics. Lynda has a bold personality and the concept and the design reflects that – it’s raw, there’s concrete block and exposed steel with a bit of glazing.”

Using concrete and exposed metal will enable the climbing ivy and Virginia creeper plants to envelop the building again, restoring the building to its former leafy glory. The addition of a balcony and glazing on the upper floor will take in views of the mountains and lakes.

Lynda envisions her new artist’s studio doubling as a personal yoga studio – all with prime views to inspire and invigorate her work. Once complete, she’ll return the downstairs gallery to its original purpose: a home for art that’s created ‘outside of the square’.

Making use of the oddities of the original building, the space and the opportunities to create something new have been a key part of this project.

“Unique is a word that’s bandied about a lot, but I believe this is it,” says Lynda.

This article first appeared in Building Dreams magazine, November 2020, and has been republished with permission

Ivy Box today #So much happening# Boys are Awesome

Just finished had so much fun painting this little